Located on Ireland’s western-most edge, Slea Head on the Dingle Peninsula treats visitors to a cluster of ancient sites, cozy villages, and breathtaking scenery. This quintessential Irish circular driving route starts and ends in the town of Dingle, where pubs, music, shopping, and a dolphin named Fungie have charmed generations of visitors.

On Tripadvisor, the tourists have rated Slea Head Drive as number 1 thing to do in Dingle peninsula with an excellent visitor rating, read the endorsements here.

As a part of Wild Atlantic Way, the slea head drive starts from town clockwise route winds its way up lush green hills, around craggy mountains, and along gorgeous stretches of shoreline. The route is supported with road signage throughout the road trip.

Here are the highlights along the 47km/30mi route:

This energetic fishing port is one of Ireland’s largest Irish-speaking towns. Pubs, restaurants, and shops dot the town centre and family-run B&Bs radiate outward. The Oceanworld aquarium lets visitors explore marine life indoors; while a human-loving dolphin named Fungie entertains crowds in the bay as he has since the 1980s. Visit Dingle Peninsula Guide here

West of Dingle along the R559, Ventry Bay harbors a lovely beach. From here, views of the arrowhead-shaped islands of Skellig Michael and Little Skellig can be seen in the distance. 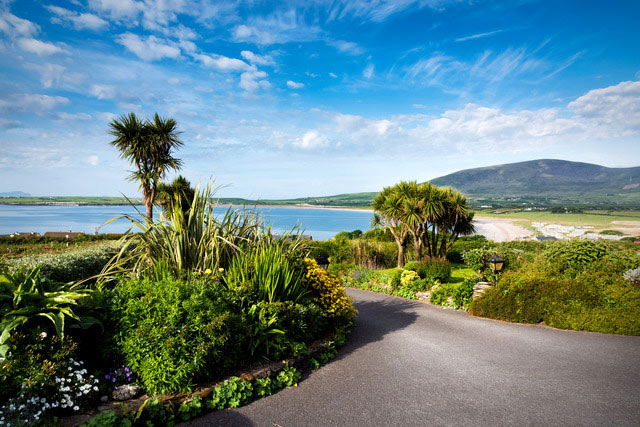 This dramatic cliff top promontory hangs over the bay below. In use from the 800 BC to 900 AD, today its ruins still hold a bit of mystery. Looking back from the fort offers views of the Dingle coastline and Mount Eagle which was the first sight of land for Charles Lindbergh when he made his famous transatlantic flight.

Built like stone igloos, these shelters were built into the hillside by early religious settlements. A short uphill walk is required, and visitors are advised to watch their head if they enter the low doorways.

Although it looks like the stream that flows over the road is at risk of a deluge of water, it is actually built into the road and affectionately called the “upside-down-bridge.”

A second grouping of beehive huts can be visited, and from this spot one can look down the hill to view a scene captured on film with Tom Cruise and Nicole Kidman’s in Far and Away.

The headland that gives this route its name is marked with a large white crucifix against the rocks and an oceanside scenic pull-off. Several pull-offs in this area offer views of the Blasket Islands and Dunmore Head.

This interpretive centre was created to document the unique community that lived on the Great Blasket Island. The fishermen and farmers here maintained many of Ireland’s traditional ways of life until the island was abandoned in 1953.

Overlooking Smerwick Harbour, this site includes several ruins and is highlighted with a particularly beautiful carved stone pillar dating to the 7th Century.

This tiny church has been around for over 1,000 years, but it’s stone roof and walls have withstood the test of time. A privately owned visitor centre offers a video about the site, or visitors can access the oratory from the narrow road to right of the centre. View the Google street view!

The remains of this Irish Romanesque church are surrounded by an old cemetery filled with ancient carved stones and a striking view.